Tested channel systems – we’ve spoken about them before. We know that they may be the ‘way forward’ in M&E and construction in general, what with the strive for a safer future focused on compliant installations, testing, evidence and system identification. But what makes them so important? How are they even different to our current approach to channel? Keep reading to get a clearer picture.

What is channel (the traditional way)?

Channel is the selection of supports, sections and fittings. Commonly known by the original brand name of Unistrut, channel section has become the construction industry norm for building services supports.

Coupled with threaded rod and associated fixings, channel sections can be prefabricated into support frames (e.g. for single pipe, double pipe, or cable runs). For example, as single or multi-tiered trapeze brackets suspended off steel purlins or straight from the concrete substrate via thread cutting anchors.

But traditionally, what we are guilty of in M&E is that we have many products, such as the one listed above, and often mix and match these products without suitable testing. In the absence of it being systemised or having data to prove it, it is just a product and not a system.

On top of this, as highlighted by the ‘Building Engineering Services Association (BESA) – Guide to Good Practice for ‘Supports and Fixings’ TR50’, procurement decisions are way too often made on price alone – or worse still, changed on site without any knowledge of the implications. These longstanding practices are clearly questionable. 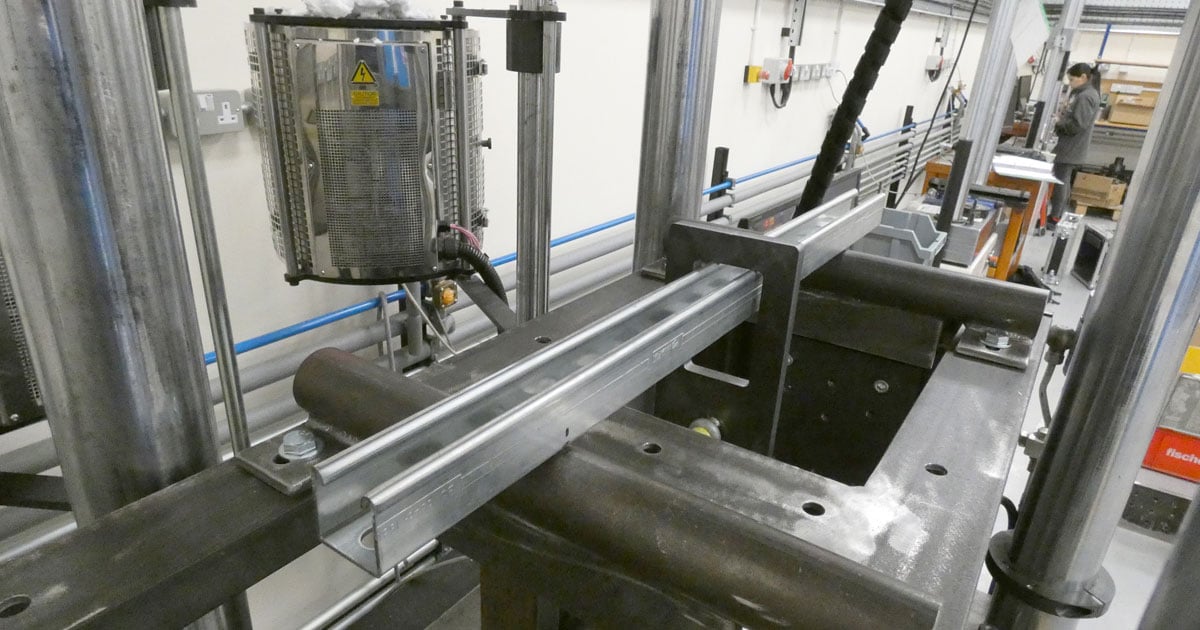 What is a tested channel system?

A tested channel system is a comprehensively tested support ​system that allows the specifier and contractor to ​substantiate the supports they have installed are fit ​for purpose and will safely take the loads applied ​to them. Technically, it’s the same thing as channel except it’s being tested and systemised

But what do you need to make up an effective tested channel system? There are a couple of main elements. The first of which is, self-evidently, that it needs to undergo extensive testing. ​This would be done by an independent test facility for proven performance. What we would achieve from these tests is comprehensive and reliable load data. This is critical for engineers designing supports and validating the integrity of an installation.

The second is: it must be identifiable and subsequently traceable. This means that each component of the system has to be stamped with the manufacturer's name or logo. Being able to trace back where and whom the system came from (i.e. the manufacturer), even at site level, is important because it indicates that these two (or more) components are part of the same system, have been tested together, and work together safely; giving you the verification that you’ve done everything correctly.

The key point to make here is that product-wise, this is not something new. The products are the same; what makes all the difference is the evidence behind them. That is what constitutes a tested channel system. We’re comparing products that don’t have data to back them up against a comprehensive, integrated system backed up by plenty of evidence (though made up of the same products). Look at the bigger picture!

What has influenced tested channel systems?

In recent years, reviews, recommendations, and regulations have been introduced to urge individuals in the construction sector to be aware of safety and compliance at work. The 2018 report by Dame Judith Hackitt titled “Building a Safer Future: Independent Review of Building Regulations and Fire Safety”, which was commissioned in the aftermath of the Grenfell Tower fire, is an example of something that has had a significant influence. It has resulted in a thorough examination of industry practices, not just in relation to the immediate issues that triggered the report (i.e. fire safety), but across all industries and concerns. All construction sectors must now assess long-standing practices and demonstrate how they contribute to ensuring that the finished building fulfils the essential criteria for the facility's and its occupants' long-term safety.

There are a couple of key phrases from the report that prompted the introduction of tested channel systems, namely: “Principal contracts and clients should devise contracts that specifically state that safety requirements must not be compromised for cost reduction”. Certainly, there are ways of reducing costs, but it shouldn’t be a factor that affects your specification decisions nor a priority.

Another major line is: “A clearer, more transparent, and more effective specification and testing regime of construction products must be developed. This should include products as they are put together as part of a system… There is a strong case for materials and products to carry permanent marking to ensure their identification and traceability.”

The above quote directly impacted the way we look at our industry and allowed us to rethink our current practices. Mixing and matching shouldn’t be the norm – what we need are tested and developed products as part of a fixed system. The marking is what proves this.

The Hackitt report identifies the need for “an improved labelling regime which will facilitate the right products being put together as systems and enable more effective record-keeping of this information through the golden thread of building information.” So, we also need each individual component of the bracket installed to have the technical submission readily available.

The aforementioned BESA TR50 also fortifies what we learned from Hackitt and says that installing without requisite competence is ‘fundamentally flawed and makes it difficult to demonstrate that the supports and fixings have been correctly designed and installed and therefore fit for purpose”. Reiterating that products must not only be specified correctly but also installed correctly.

Why is untested channel and fittings (the traditional approach) no longer sufficient?

The main thing that is missing for the current offering is quite simply, a lack of tested products as an evidence-based system, and transparent product information and identification.

Take a look at your previous installations – think about how many of them have failed. The answer is probably very few, if any. But let’s change the question – how many can you demonstrate are fit-for-purpose with sufficient evidence? I’ll take a wild guess and say, also little to none!

And that’s precisely why our ‘old ways’ are no longer adequate. I’m not claiming that your installations will fail; in fact, it’s unlikely that they will. But having the evidence to prove that they won’t is the key. Lack of failure =/ evidence.

Now, you may be thinking, is the manufacturer’s data not enough evidence already? After all, each manufacturer gives the load data performance for individual products… But the answer is no, you can’t rely on that alone.

Going back to our previous statement, something very common in our sector is mixing and matching components. As soon as we introduce another component, all that load data is annulled because it hasn’t been tested with its partner product. The data isn’t comprehensive enough. You may be able to prove one element of a design, but not the whole bracket structure. This isn’t an issue with tested channel systems, as everything is tested together.

Another point is, that other manufacturers’ channel products nearly always use calculated data based on material performance, and that means that it is a desktop calculation as opposed to a physical application-based laboratory test. Again, this issue is resolved with tested systems as they are backed up by extensive physical testing. 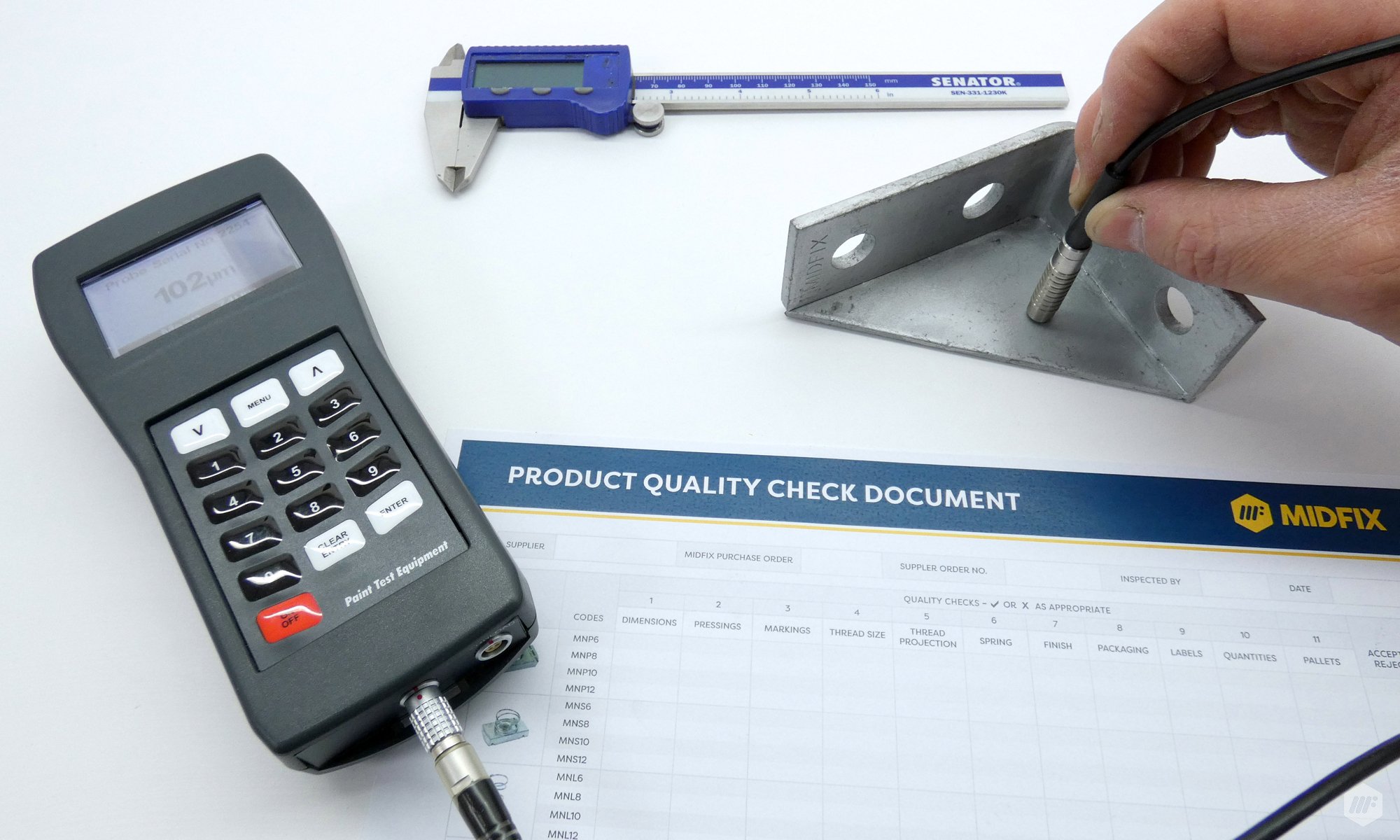 How are tested channel systems likely to impact my M&E installations?

Change is underway, whether we like it or not. In fact, it’s already happening. The Hackitt report mentioned above resulted in the Building Safety Bill being updated in 2022, which has now reached Royal Assent. Within the next 18-24 months, much of what is in it will become legislated. That includes the golden thread i.e. ‘the information that allows you to understand a building and the steps needed to keep both the building and people safe, now and in the future’. It will become mandatory for the people responsible for a building to put in place and maintain.

The solution to the above problems is to engage with a comprehensively and independently tested channel system for the M&E industry. This means taking ‘legacy’ products (what is and has always been used), making them identifiable, and then independently test those same products as a system (not individual components). This will provide all the evidence we need to validate the safety and efficacy of your installation.

So, what does that give us? A good part of it is the technical load data and the guides. If we look at a typical trapeze bracket as an example, every component would be tested together, starting with the anchor, the drop rod itself and the connection between it and the channel. We’d also have the load data for the load-bearer (channel) as used in the actual trapeze. On top of that, since training is also highly emphasized in the mentioned reports, user training will become a focus. Regardless of what system we employ, the individual making the bracket either onsite or in a fabrication shop needs to build it correctly, so they must be trained and competent.

A tested channel system also helps to optimise your design. One of the reasons your brackets haven’t failed previously is because they are overengineered – and even that doesn’t give you the evidence (remember, it’s about evidence not failure). So, how do you do this?

You will be guarding yourself against physical harm, financial loss, as well as reputational loss. Instead, you will be achieving safe, competent, and low-risk installations. You’ll become industry-leading, and a part of moving the industry forward. As if that isn’t enough, you;ll become much more attractive to your clients. Sounds pretty cool, right?

To summarise, the fundamental difference between ‘legacy’ channel and tested channel systems is the evidence that the latter has to support themselves, and not a new product. These systems are the all-inclusive solution or answer to the higher safety standards, design verification, compliance, and evidence that the industry is working towards. They automatically come with reliable data of all the products used, as well as proof that the products specified by the engineer are the same ones on site. Moreover, they allow supports, anchors, and any other components to be considered a single-source solution and complete system that can take the load.

I hope that through reading this article, you’ve gained a clearer understanding of the true meaning of a tested channel system, why evidence is so important, and how much of a difference they can (and will!) make; not only in M&E but construction as a whole.

channel systems - May 20, 2022
Tested Channel System: is it really necessary for my M&E installations?
6 min read