Getting started with rooftop plant support frames [8 things to consider]

As an M&E contractor, when it comes to choosing frames for rooftop projects, you may be slightly confused as to how you can begin to differentiate and determine which frame would be best-fitting for each specific unit.

It comes down to the smallest of details – but it does make a difference which one you go through with in the end. If you have the options, why would you go with the second-best?

There are certain factors you should think about when deciding what type of frame to use to support plants and large units. These are called rooftop plant support frames, and more colloquially, AHU (Air Handling Unit) frames (despite AHUs only being one type of many frames the units can support). 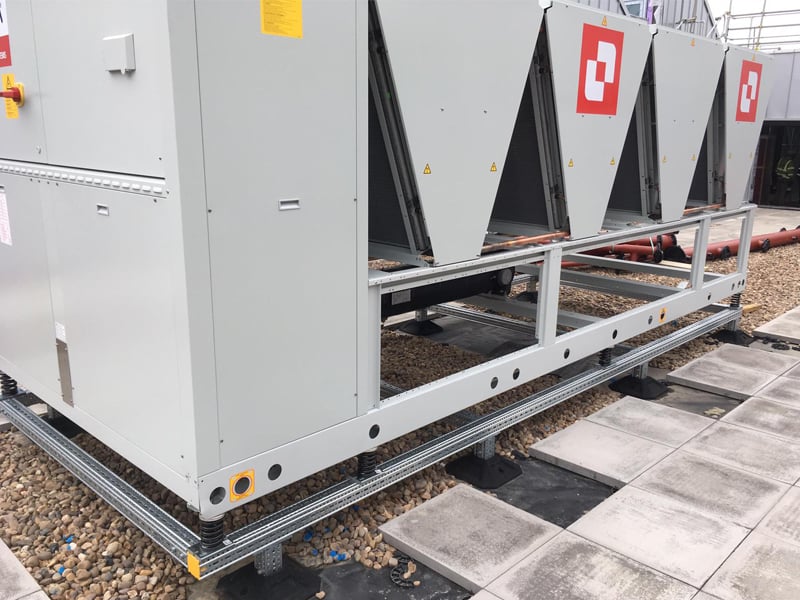 What are the rooftop support options?

Before you start to break down why and how a certain type of frame might be the best choice, you need to first ensure that you know all of your options and understand what the different types of frames are appropriate for.

Firstly, you have channel-based systems, which are non-modular, also called strut. These have been trusted in the M&E industry for nearly a century and are a go-to product for many contractors. They can be made very bespoke as they are versatile, easy to configure and add to, don’t require excessive labour, and aren’t expensive. The frame could just be made out of the standard channel or channel fittings, with some feet attached to it – there are also companies out there that make interfaces that work with channel. Because of how lightweight channel frames are, they are often used for AHU support frames. For heavier loads, back-to-back channel systems can be used instead.

Secondly, there are traditional steel profiles such as PFC and I-beams that are welded together to support very heavy-duty building services, including AHUs. This, again, can be completely bespoke or used with interfacing products. Traditional steel is great for heavy-duty applications and can suit certain loads where only a few supports are required.

However, Framo is often used for its modularity and adjustability as opposed to its performance when it comes to higher loads. Commonly, people will default to Framo even when they don’t need to, and it can be overkill. But up until now, there’s never been a channel-based version that allows for the same amount of adjustability.

There’s a recent innovation in the marketplace which is a modular version of a channel-based system called MX-R. It is an adjustable and modular system that utilises traditional channel (both single and back-to-back) and provides those valuable benefits without the added cost or weight of Framo. The channel is used in conjunction with fittings/connections between the beam sections and cross members, and feet whose height you can adjust up and down, allowing for that adjustability. In cases where Framo is above and beyond what you need, this may be a better option for you. Not too little, not too much, but just right! 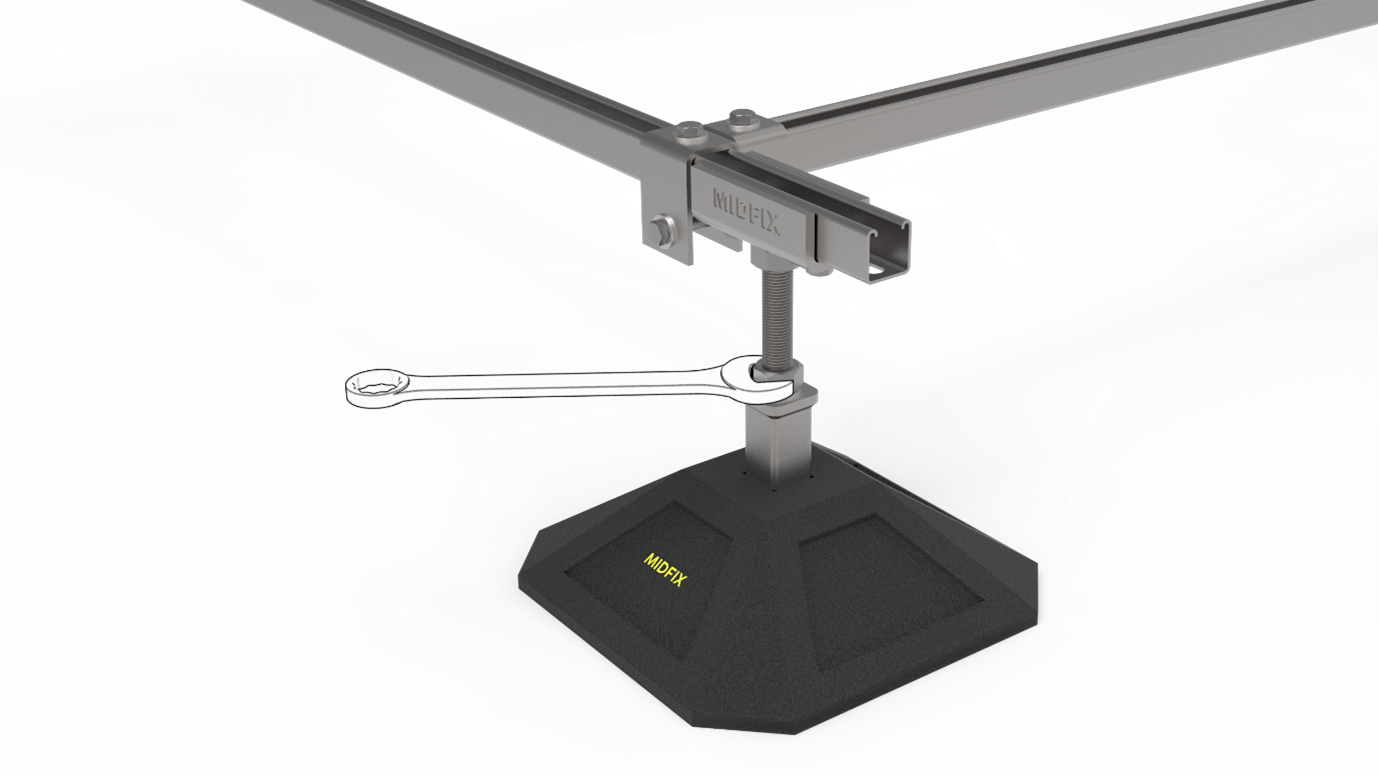 Following on from the previous point, the weight of the AHU or other type of large unit should also help determine the most appropriate support frame. As mentioned, the different types of steel are best suited for carrying different loads, e.g. modular and traditional steel can carry heavier loads. The aforementioned MX-R system utilises both single and back-to-back channel, so depending on your loads, you can pick either of these profiles while still keeping the modularity aspect.

For this reason, you should thoroughly consider what type of unit the frame will be supporting and how much it weighs before deciding which one to go for. Additionally, heavier AHUs will cost more during the manufacturing process because the support frames would require more material, and therefore more feet.

Moreover, sometimes the point loads need to be evenly distributed per section as opposed to feet. While normally if there was a unit too heavy for each foot (point load), more feet would just be added, in cases like these the section/frame would be re-evaluated and it might mean switching onto a larger profile. If there was a unit that could be comfortably done out of single-channel, but one end was heavier than the other, then by stepping up to back-to-back channel, the load would be spread out a bit further. 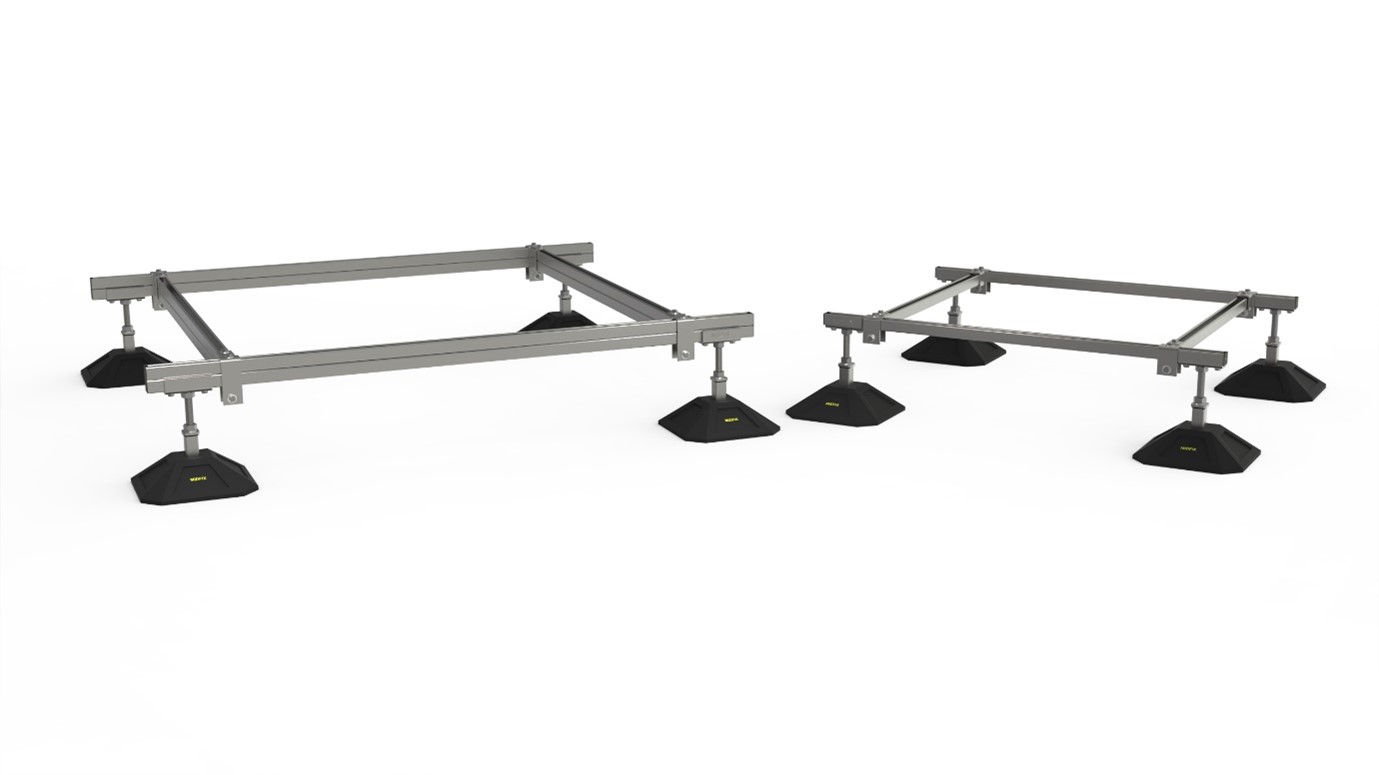 The roof pitch refers to the gradient of the roof, or its angle. It is quite common for there to be anywhere between one and six degrees pitch. Naturally, this is important to consider when dealing with AHU roof support frames because you have to make sure they don’t slide off the roof!

To do this, we have two options: either angled feet, i.e. a rubber foot that is thicker at one end than the other, or square wedges of rubber that can be placed under normal flat feet.

One thing to note, though, is if you are dealing with traditional steel, you’d have to cut the legs at a specific angle and weld the base plate on, and you have no flexibility. Let’s say you’re unsure if the roof is at a 5-degree or a 6-degree angle; if it was a welded frame that would actually be a determining factor, whereas if you’ve got an MX-R or Framo system and the rubber feet, it wouldn’t matter so much because the feet would absorb the difference. So, just keep that in mind if you’re dealing with a pitched roof. 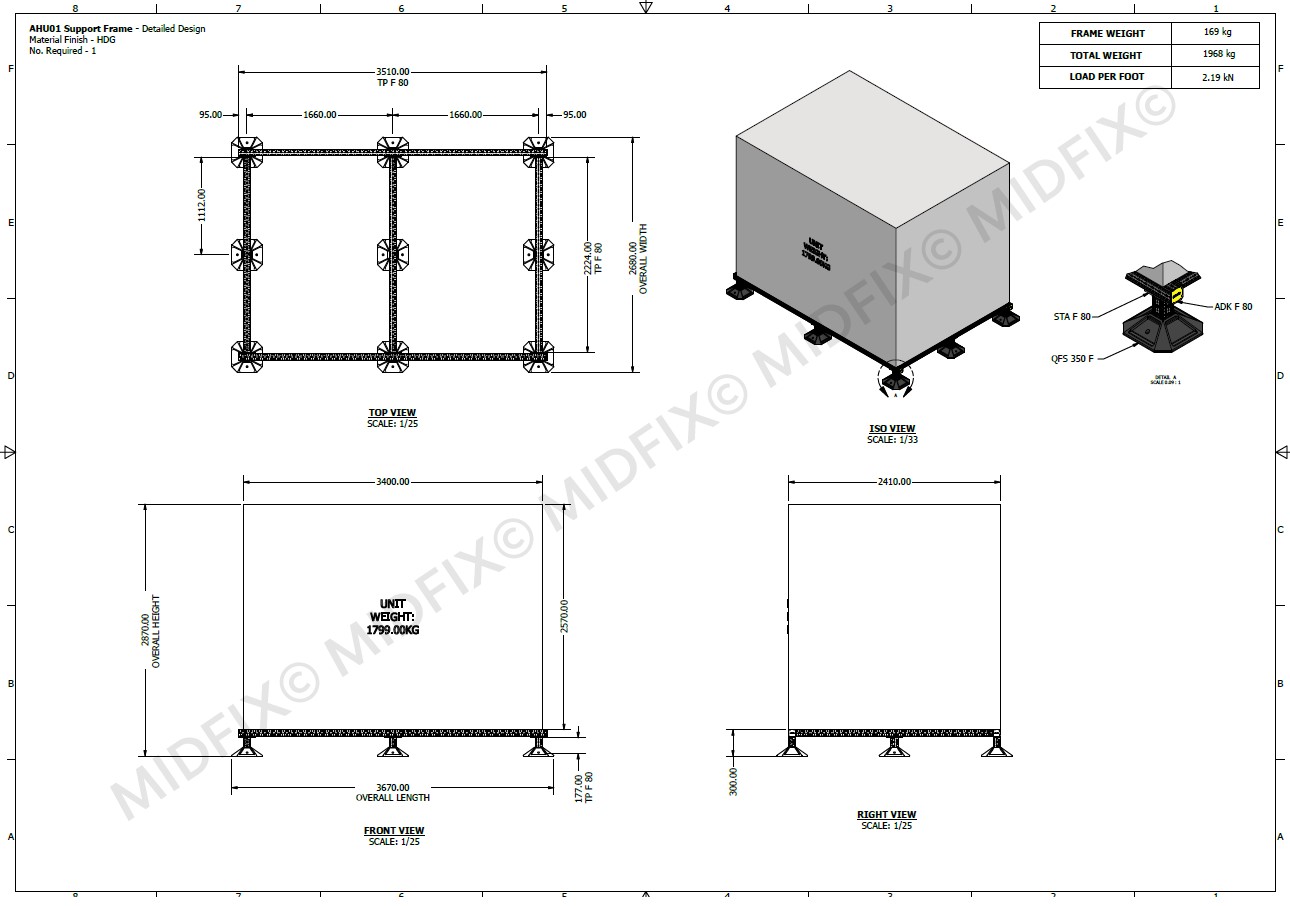 While the weight of the plant or equipment is a key point, the dimensions are arguably even more important to consider.

Firstly, you should consider the dimensions of the unit that the frame will be supporting – usually, the frame should have the same or similar dimensions to the unit. Unsurprisingly, this is typical, and if you do so you need to make sure the profile that you’re using is strong enough to hold the weight, with every frame.

For example, let’s say you’ve got a 4-tonne unit that is two metres long and 1.5 metres wide – if your support frame has the same dimensions with only 4 feet, that would mean each foot would be holding a tonne each, and the steel needs to be sturdy enough. However, if your frame is longer and had 8 feet, each foot would be carrying half the load – which would mean it would be more evenly spread out, so you wouldn’t need such heavy-duty section.

On top of this, the larger the unit/frame, the more steel is needed, and the more steel needed the higher the cost will be – so this also affects the budget. Also, the dimensions may or may not pose logistical challenges, making it harder to move to the site (which might also increase costs) – so give that some thought as well.

Before choosing your AHU frame, you should gather as much information as you can from the structural engineers including the global and local pressures, the wind loadings, point loads, insulation compressive strength. Though such meticulous deliberation may seem like overkill, it’s better to know all the information possible rather than knowing too little.

For example, with AHU units, wind loadings might not be so important since they are usually too heavy to be affected by the wind. The weakest point in the build-up of the roof surface is often the insulation, usually a Kingspan foam-type material, so the insulation compressive strength (i.e. how much pressure can be put on the insulation before it crushes) is something to take into account.

Despite it being within the load-bearing capacity in most cases, the point is it’s still a concern to be aware of for certain cases. In such instances, it might affect the type of frame you choose in that, if you are over the limit and were using a Framo frame, you might save a bit of weight by moving to a back-to-back MX-R frame; that way you maintain the adjustability but with a lighter frame, reducing the pressures to below those limits. 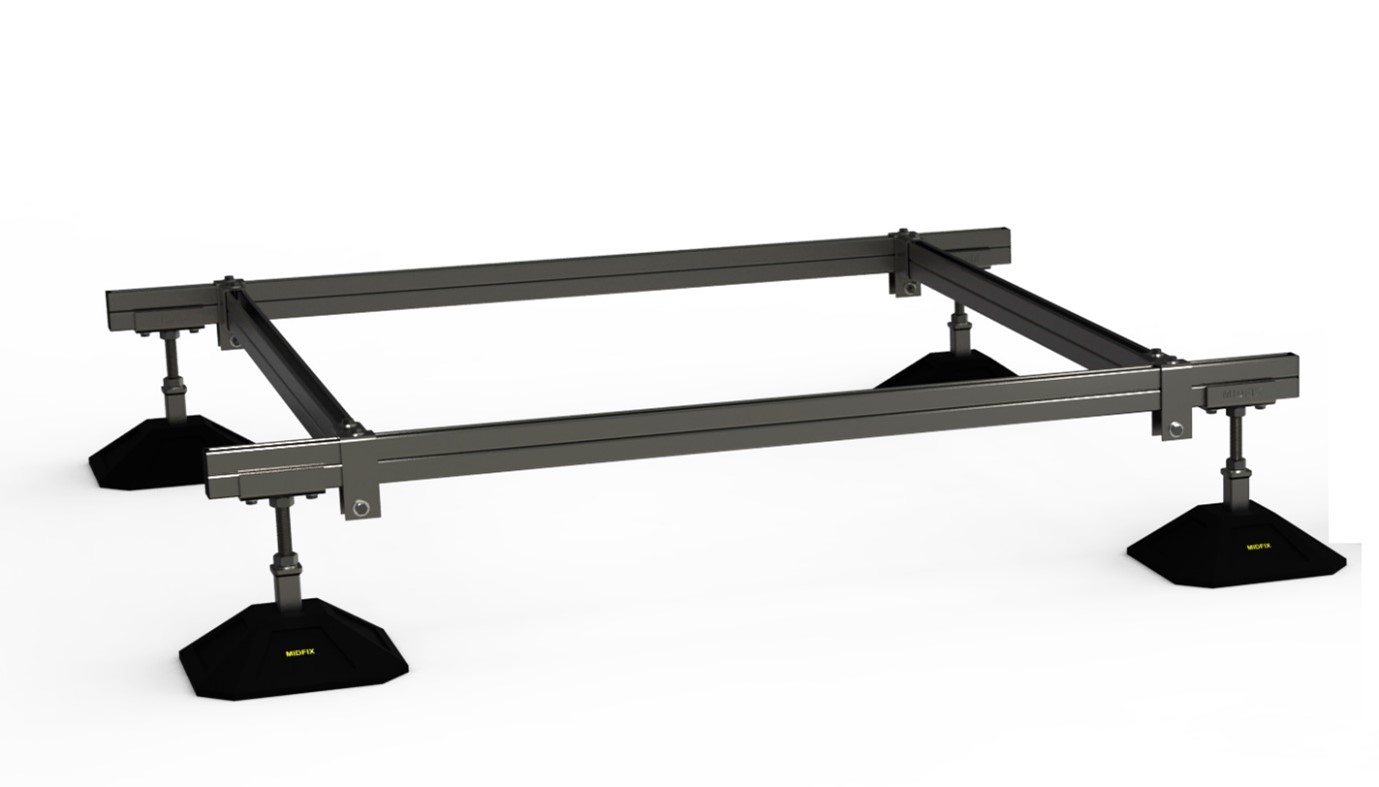 You’re also likely to increase foot size (place bigger feet on it) in hopes that it will help spread the pressure out. That would probably be one of the only times you would change the frame; to reduce the weight of the frame, and subsequently the point loads or the pressure.

A lot of the time, what you choose and the solution you come up with will ultimately come down to whom you know and the relationship you have. But it’s worth doing your research - some companies will only have traditional channel systems, while others will have the modular channel system (MX-R) and others will mainly supply Framo. The point of this article is to make you aware that there is a variety of options available, that might be a better match for your projects, and you don’t have to ‘stick to what you know’.

Finally, your budget is undoubtedly a major component that will likely greatly affect the decisions you ultimately make and influence all of the aforementioned considerations. For example, if your budget is lower and cost is your priority over convenience, you’re more likely to use channel or traditional steel over Framo as it would cost less.

An MX-R system would be a good inbetween of Framo and traditional steel because, as mentioned, you still get to enjoy the benefits of Framo but at a much more cost-effective price. However, it would be slightly more expensive (than traditional channel) because instead of standard channel fittings, you would need the MX-R fittings and feet; though it wouldn’t be a significant price difference. So, it comes down to whether adjustability or the cheapest possible option is your priority.

As mentioned, the amount of steel used would also drive costs up. The labour of highly skilled welders would also cost more. There are a number of elements to be aware of to stay within your budget.

This is something you should always consider, as it applies to any project. The rule of thumb is that the earlier you engage in the project and supply chain, the earlier and more likely you can arrive at the best solution and meet the deadline. Production times, manufacturing times, design times, and delivery timescales, all need to be taken into account.

Of course, modular options will always be quicker, and that includes both modular channel systems (MX-R) and secondary modular steelwork (Sikla Framo). The manufacturing time of both is reduced considerably; they can be done in as little as an hour (if stock is available). It’s also much quicker to install than traditional channel or steel.

What type of plant support frame should you go with?

Hopefully, after contemplating all of these considerations, you’ve managed to narrow down your options from the different types of AHU support frames to the most satisfactory fit for your projects. At the end of the day, a few different types will probably ‘do the job’ – but you might as well choose the frame that will do the job the best and most efficiently; for you as well as for your customer.