In our latest podcast we sat down with Dan Baker from Stourflex, a leading supplier of pipework expansion joints and pipeline equipment, to discuss thermal expansion and its impact on pipe installation for M&E projects. In this podcast we covered the following questions:

What is thermal expansion?

Defined as ‘the general increase in the volume of a material as its temperature is increased’ (Britannica) thermal expansion can, if left uncontrolled cause pipes to fail. This can impact different lengths of pipe with any nominal bore and a variety of applications. For example, if we take steel pipe, it will be at a low temperature but once heated a 30 metre length of pipe may expand up to 30mm causing the pipe to fail if not controlled correctly.

There are two main factors that dictate thermal expansion:

These factors need to be considered in detail to specify the right solution.

How can you control thermal expansion?

There are many ways to control thermal expansion. The best place to start is during the design stage of pipework, making sure that the pipes have natural flexibility. This can be done by designing loops within the pipework (supported naturally) reducing the requirement for expansion joints as the natural change in direction will absorb the thermal expansion.

One other solution is to add expansion joints such as axel, lateral and angular types, all of which will help to control thermal movement within a system.

How can thermal expansion cause a pipe system failure?

There are many different reasons why pipes fail, one of the common reasons is because thermal expansion hasn’t been controlled correctly. When cutting bellows into a system, you instantly put pressure into the bellows, if the bellow is not installed, guided or anchored correctly then the expansion bellow will collapse. However, 9 times out of 10 it is not the expansion joints that is the problem, more often it is one of the many other variables including the installer.

Are installation errors the main reason for pipe failure?

Installer error usually boils down to the lack of training within the industry, similar to the problem faced with anchors and fixings. Whilst thermal expansion graduates in the industry can carry out the relevant calculations, this learning falls short on site-led practical experience. This sometimes means that contractors who may be looking for advice from qualified graduates are sometimes hesitant to accept guidance from those that do not have practical experience.

Why do some contractors blame expansion bellows for pipe failure?

In order for thermal expansion to perform effectively, the entire pipework installation needs to be complete as other variables can impact the performance of the bellows. In most cases, it is very rare that the thermal expansion product fails. As an example, it is not uncommon that when inspecting a failure, it may be that the pipework anchors have not yet been installed and thus the installation is not complete. 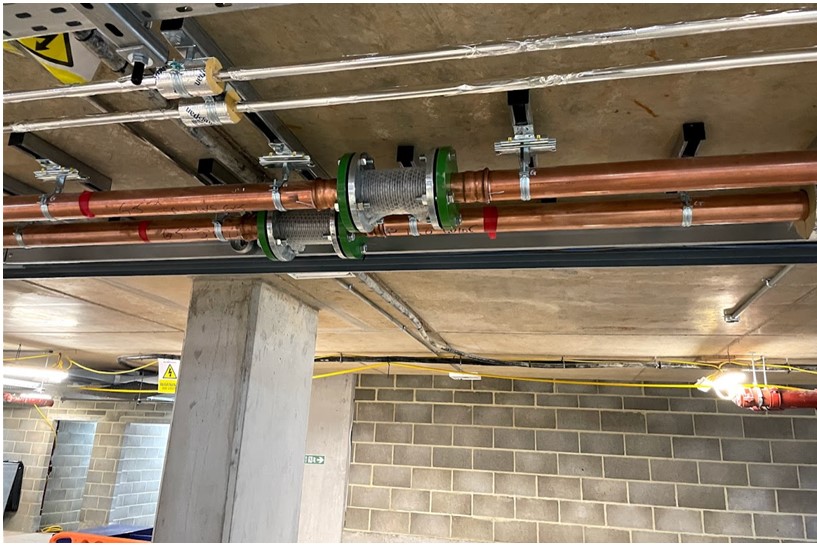 At what stage of a project should thermal expansion be discussed?

Thermal expansion should be considered as early as possible in the project, i.e. within the tier 1 consultants package. Indicative anchor points and expansion bellows should always be highlighted on project drawings.

Quite often the design consultant will note on the specification that “expansion needs to be looked at by a specialist”, the contractor then must take on that responsibility, but quite often, the contractor will only consider thermal expansion at the last minute.

However, if expansion joints are specified on the drawing, even if they are in indicative positions, it sometimes leads the contractor to consider expansion joints earlier on, and therefore mitigating the risk of last-minute supply issues causing pipe failure.

In most cases, the decisions around thermal expansion should be consultancy-led before the contractor goes out to tender for the pipework requirements.

What advice would you give to a contractor on a project regarding thermal expansion?

Communication and early engagement are critical to the success of mitigating the risk of thermal expansion for pipe runs. Here are four points to consider:

What is the future for expansion joints and bellows?

Within the industry, there is an increasing awareness around thermal expansion and a clear idea of how to control it. The growth in modular core risers has led to a greater need to understand how thermal expansion can have an impact on pipework systems. This comes from an increased focus on the protection of branches, low temperature, and hot water pipe runs in risers. Companies like Stourflex are investing in R&D to bring about innovations that will solve more problems created by thermal expansion.